Every day, Warszawa Centralna station, located in the heart of the Polish capital, can transport passengers across the country or to international destinations as far away as Paris, Berlin, Vienna, Prague, Budapest or even kyiv and Moscow.

But since Russia invaded Ukraine last month, Warsaw Central Station, as it is known in English, has seen a steady stream of Ukrainian refugees fleeing their homes – carrying bags full of their belongings, seeking help as they fled the Russian incursion.

Inside, a woman was walking around with a handwritten sign saying, “I’m from Ukraine. Help me please.

It’s a sign of what the United Nations is calling the worst refugee crisis since World War II.

A month after the start of the Russian invasion of Ukraine, almost a quarter of the country’s population more than 44 million people have been displaced, according to the United Nations.

More than 10 million people have been forced to flee their homes and leave everything behind, according to the UN refugee agency. Of this figure, more than 6.5 million are internally displaced and 3.7 million have fled Ukrainian borders.

No nation has taken in more refugees than Poland: more than 2 million Ukrainians have crossed the border to their neighbor to the west, leaving everything behind in fear for their safety.

The Warsaw train station has been transformed: volunteers dressed in brightly colored vests help refugees with everything from information to translation, or even a cup of coffee. Bins filled with stuffed animals are available for children. 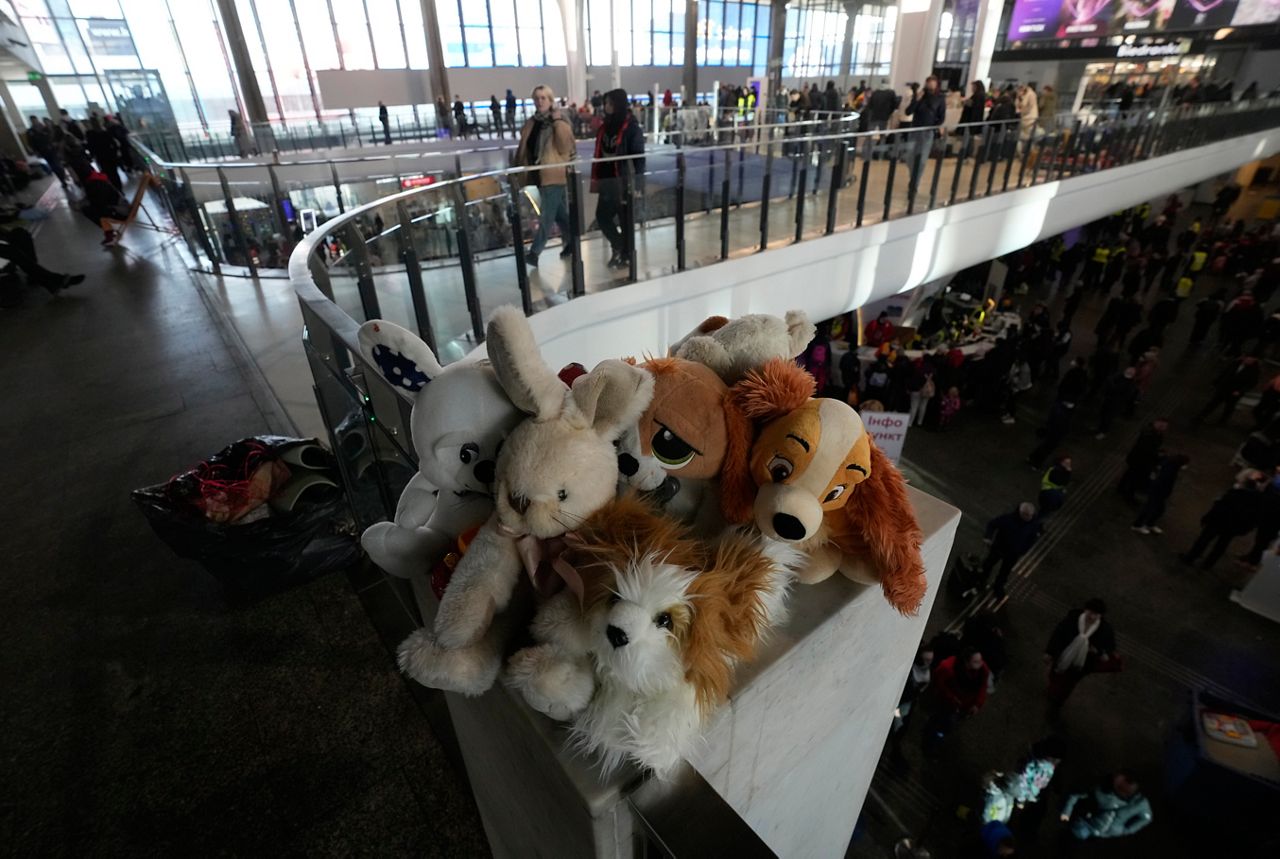 There are signs for phone chargers, medical care and messages of encouragement. Outside, celebrity chef José Andrés’ World Central Kitchen provides thousands of meals a day to those in need.

Fiona from WCK checks in from Warsaw 📽️ More than 300,000 refugees have arrived here in recent weeks. The families do not want to travel too far from Ukraine in the hope of being able to return home soon. To support, we provide 15,000 meals every day at Central Station. #ChefsForUkraine pic.twitter.com/uDiSbzsmPi

There is even a man in a giant Tyrannosaurus rex costume distribute sweets and treats to refugee childrentrying to make them smile through a tough time. 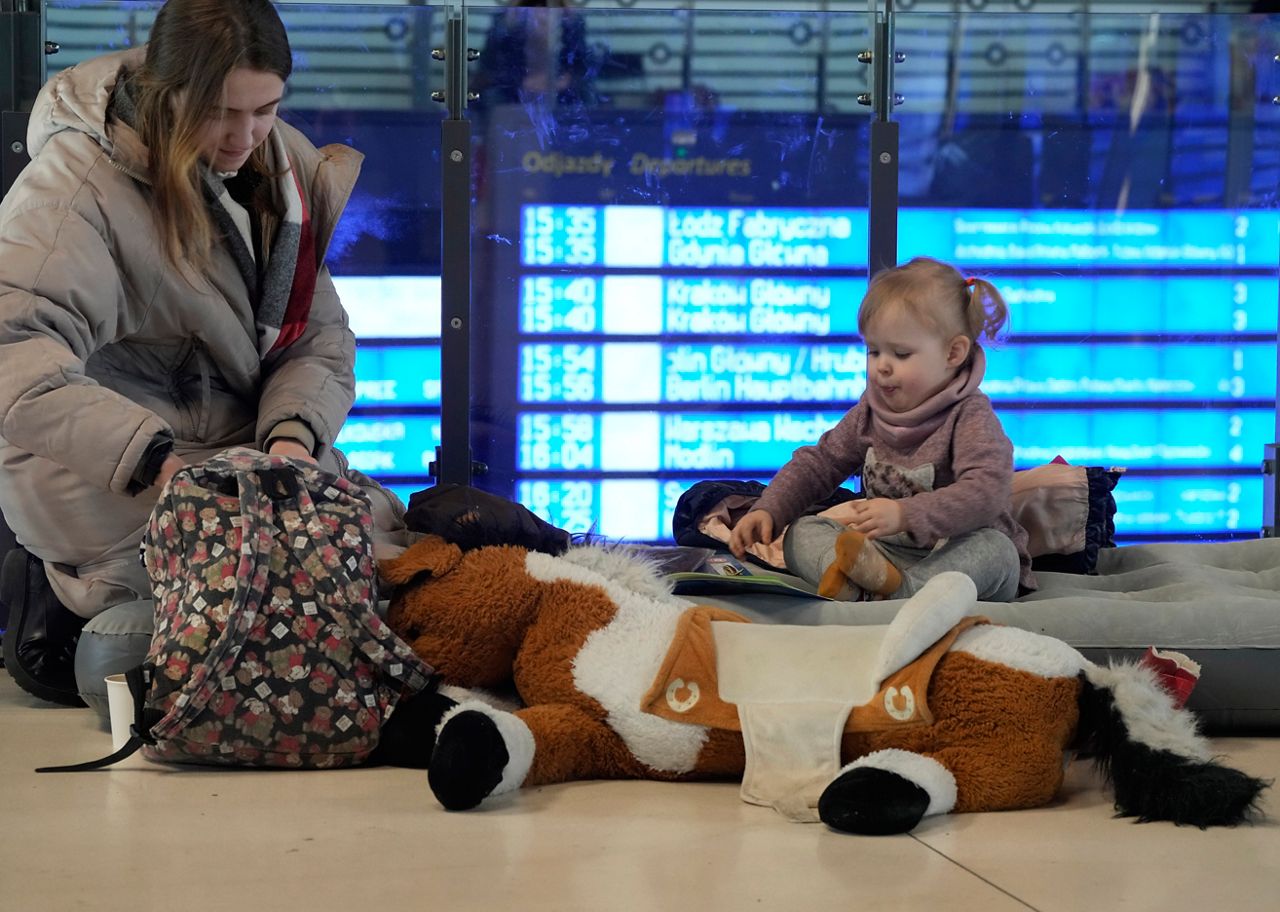 A woman plays with her child, who is sitting on an air mattress, at the train station in Warsaw, Poland, Sunday, March 13, 2022. (AP Photo/Czarek Sokolowski)

Every day, train after train brings new refugees, thousands and thousands of people seeking protection from the Russian invasion.

One of them is Joseph Nichols, an American who arrived with his wife after a four-day trip from Ukraine.

“We were lucky,” Nichols said, telling Spectrum News that he was in the United States when Russia invaded, but rushed to Ukraine after their home was destroyed by the fights.

Nichols and his wife plan to leave Warsaw for a “quieter” place in Poland for a few weeks – signs inside the station urge refugees to go to smaller towns, saying the bigger ones have become ” overcrowded”.

“Poland’s big cities are already overcrowded,” reads a sign in the station. “Don’t be afraid to go to smaller towns: they are peaceful, have good infrastructure and are well adapted.

Polish authorities provided free transport to other European Union countries, including eight special trains a day traveling directly to Germany, according to an official.

Despite the danger, leaving everything behind is a difficult decision.

“It’s not an easy choice for millions of people,” Nichols told Spectrum News. “You know, family, friends, language, culture. A lot of them are already going back.”

On Friday, President Joe Biden landed in Poland to be briefed on the humanitarian crisis and announce $1 billion in additional aid. On Saturday, he will meet with Ukrainian refugees, after announcing this week that the United States would welcome up to 100,000 Ukrainians to the United States.

The volunteers at the Warsaw station are a stark reminder of the scale of the help that is still needed.

But for some, their presence makes all the difference.

“The volunteers here in Poland – the help given is outstanding, just fantastic,” said Nichols. “Smiling, helpful people, no questions asked.”

“It would be a waste if these didn’t do what they do,” he added. 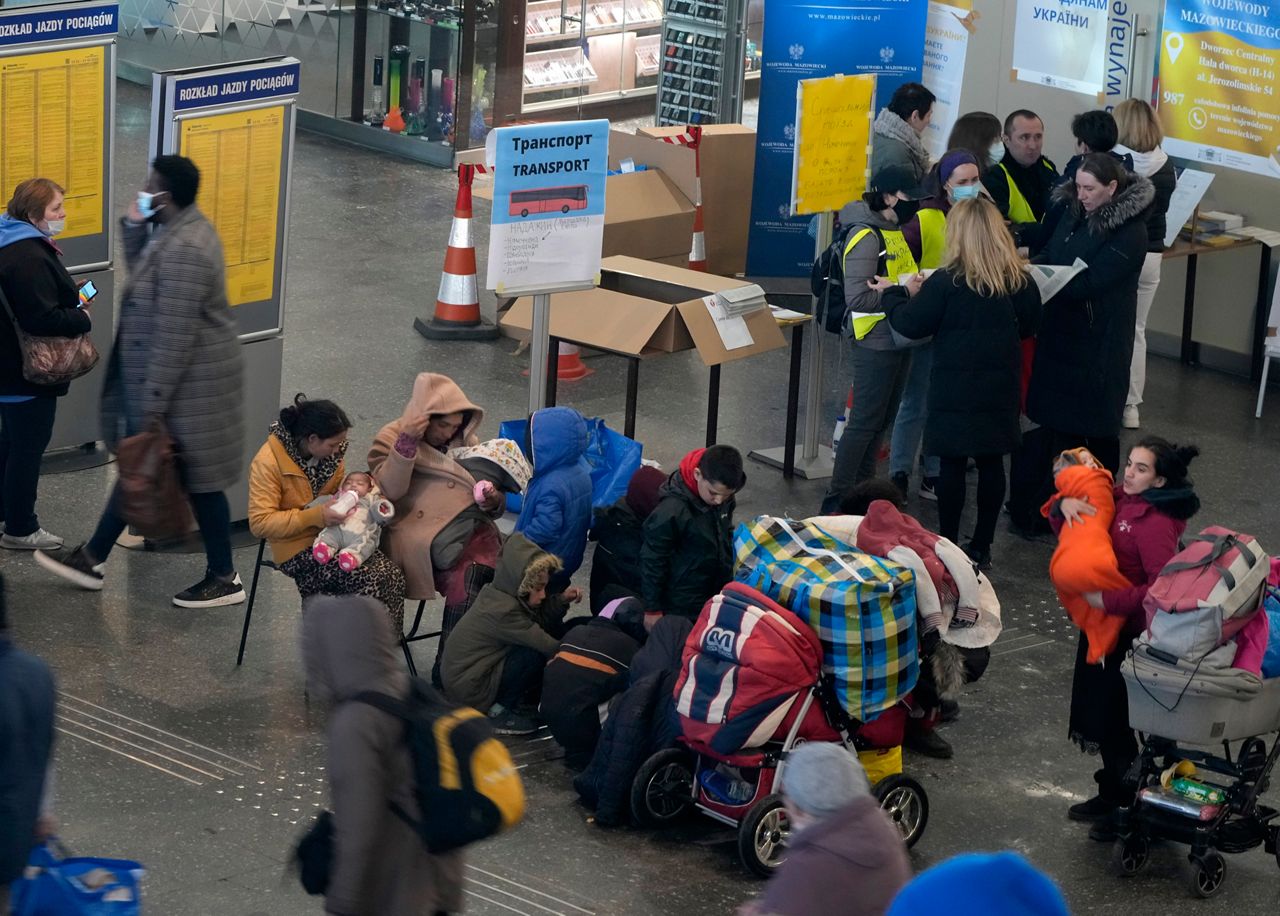 Women tend to children as they sit with their belongings at a train station in Warsaw, Poland, Sunday, March 13, 2022. (AP Photo/Czarek Sokolowski)

EG passenger station is expected to open in 2024 | New

Construction of the Connecticut parking garage at the new station on the rails: CEG

How HS2 affects journeys to and from Stoke-on-Trent station